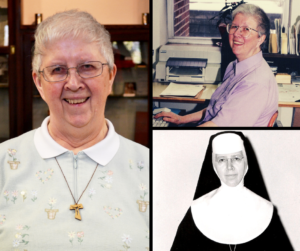 Sister Lillian Yurksaitis, a Sister of St. Francis of the Providence of God for 67 years, died at the age of 89 on October 3, 2021.  Born February 20, 1932 in Bridgeport, CT, she was preceded in death by her parents and three brothers, Joseph, Raymond, and Albert. She is survived by her community, the Sisters of St. Francis of the Providence of God, her brother Vincent (Greta) Yurksaitis, and several beloved nieces and nephews. Sister Lillian entered the congregation in 1954 and earned Bachelor’s and Master’s degrees in Education from Duquesne University. She served 20 years in education ministry, first serving at Holy Trinity in Moon Run, followed by assignments at parish schools in Pittsburgh, Grand Rapids, MI, Cleveland, OH, Kenosha, WI and Kearney and Elizabeth, NJ.  Sister Lillian then served in the congregation’s mission in São Paulo, Brazil for three years.

Upon her return to the United States, Sister Lillian volunteered at two women’s shelters, Hope House in Wilmington Delaware and Bethlehem Haven in Pittsburgh. Returning to the Pittsburgh motherhouse in 1994, she served as Assistant to the Campus Administrator and provided community support services utilizing her computer and technology skills.  In 2014 Sister Lillian was among our first Sisters missioned to Westminster Place of Presbyterian SeniorCare in Oakmont

In lieu of flowers, donations may be made to the Sisters of St. Francis of the Providence of God, 5802 Curry Road, Pittsburgh, PA 15236, or by Donate Online Here. 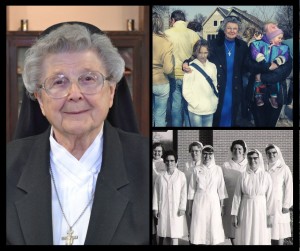 Sister M. Dolorita Butkus, OSF, a Sister of St. Francis of the Providence of God for 79 years, died at the age of 97 on December 21, 2019. Sister M. Dolorita attended St. Peter & Paul School and Battin High School in Elizabeth N.J. After entrance Sister Dolorita taught primary grades for three years before receiving her RN from St. Francis Hospital in Peoria IL.  After nursing several years at Good Samaritan Hospital in Mt. Vernon IL she trained as a Certified Registered Nurse Anesthetist and Registered Respiratory Therapist.  For the next twenty-four years, she served as the Director of Respiratory Therapy at Good Samaritan Hospital. Following pastoral care studies, she was Director of Pastoral Care at St. Joseph Hospital in Alton, IL. and Good Samaritan Hospital for ten years.

Sister Dolorita spent a year in a hermitage before, at age 70, she asked to serve her beloved Lithuania as a missionary which she did for the next fifteen years.  She helped established St. Clare Hospice for the elderly poor and created a monthly food distribution program that continues today. In 2014, due to health concerns, Sister M. Dolorita moved to Westminster  Place, Presbyterian SeniorCare, Oakmont PA, where she continued to spread God’s love and offered counseling and consolation.

In lieu of flowers, donations may be made to the Sisters of St. Francis of the Providence of God, 3757 Library Rd., Pittsburgh, PA  15234. Donate Online Here

Sister Barbara Zilch, a Sister of St. Francis of the Providence of God for 64 years died at the age of 81 on September 23, 2019.  She was preceded in death by her parents, Robert and Florence (Bodmann) Zilch.  She is survived by her sister, Mary (Richard) Miller from Elyria, Ohio; brother, Jim (Marcia) Zilch from Greenville, Delaware, and sister, Jane (William) Schray from Safety Harbor, Florida along with many nieces and nephews.

Sister Barbara was born in Amherst, Ohio on January 30, 1938 and attended St. Joseph Elementary School, Amherst, Ohio and St. Mary’s High School in Lorain, Ohio.  For one year, she attended St. Francis Academy, Pittsburgh, where the seed of her religious vocation was planted.  Sister Barbara received her Bachelor of Arts and Master’s degree from Duquesne University.

Her degrees in education were used well as she spent many years teaching primary grades at Saints Peter & Paul, Grand Rapids, MI,  St. George, Philadelphia, Holy Trinity in Moon Run, St. Valentine in Bethel Park, and St. Gabriel’s in Whitehall.  She served as teacher and principal of Mt. St. Peter in New Kensington for a span of ten years.  From 1983-1987, Sister Barbara was part of an inter-congregational House of Prayer in Uniontown, PA.

Sister Barbara ministered as Vocation Director, Formation Director, and Coordinator of the Franciscan Spirit and Life Center, a program for retreats and spiritual development.  Sister Barbara had the joy of being the President of the Franciscan Child Day Care Center from 2001-2017.  For seventeen years, Sister Barbara was part of the Leadership Team for her community.  Until her passing, she served as the Director of the Associate Program, for lay women and men interested in sharing the charism and mission of the congregation.  We give thanks to God for Sister’s life, her spirit, her service and her many years of proclaiming the Good News. 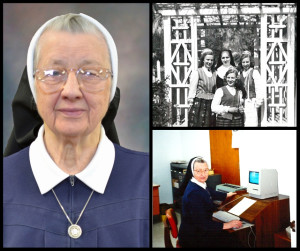 Sister M. Berenice Petrauskas, OSF, a Sister of St. Francis of the Providence of God for 68 years died at the age of 89 on April 10, 2019.  She was preceded in death by her parents and sisters, Hedwig (Hedy), Regina and Irena.  Born March 14, 1930, in a small village in Lithuania, Sister Berenice survived the onslaught of both Nazi and Soviet forces during World War II, as well the loss of her parents and family farm before escaping to the United States with her Sisters in 1947.  Recalling this time, she wrote, “Bless the Lord for all the good He has done for me.”

Sister Berenice attended St. Francis Academy and entered the community upon her graduation in 1951. Sister served as an educator for 30 years receiving both her Bachelor and Masters of Education degrees from Duquesne University. Her assignments included elementary schools in Pittsburgh, West Mifflin, Mahanoy City, and Moon Run, PA, as well as Rochester, NY, Elizabeth, NJ, Detroit, MI, Kenosha, WI, and Coopersville, MI.  After retiring from education, Sister Berenice served as a clerical aide in our administrative offices for over 25 years until 2015, when she entered the ministry of prayer and presence with our community at Presbyterian SeniorCare.

Sister M. Berenice’s Wake Reflection: “All I can say is ‘Bless the Lord for all the good He has done for me.’ I loved being a sister.” 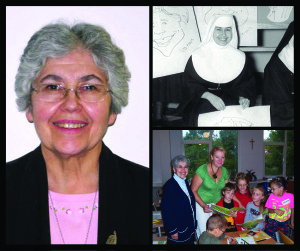 ister M. Michele Garas, OSF, a member of the Sisters of St. Francis of the Providence of God for 55 years, died at the age of 76 on Tuesday, December 11, 2018. We offer our continuing prayers that she will rest in the peace and love of God in her eternal home.  We give thanks to God for Sister’s life, her gentle spirit, and her unique way of manifesting the goodness of God.

Sister Michele was born in Utena, Lithuania, and escaped to the United States with her family in 1949 after they had been placed in a Soviet displaced person camp. At first, they lived in Baltimore before moving to Detroit, where she was taught by the Sisters of St. Francis of the Providence of God. After working a few years, she entered the congregation in 1963.

Sister Michele is a graduate of Carlow University with a B.S. in Reading, as well as having taken additional courses at Duquesne.  Sister’s early ministry was as an elementary school teacher in and around the Pittsburgh region, including Moon Run, Bethel Park, New Kensington, and West Mifflin. Other assignments included schools in Detroit and Grand Rapids, MI, Kenosha, WI, and Mahanoy City, PA., On October 4, 1992 (appropriately the Feast of St. Francis of Assisi), Sister Michele went back to her native country, joining Sister Dolorita Butkus as the first of our Sisters to return to Lithuania since the late 1930s, to serve its people. Sister Michele served as a pastoral minister prior to teaching Religion and English at Utena’sSalues School. She also worked with children, helping them prepare for Baptism and Communion. After 20 years serving in Lithuania, Sister Michele returned to Pittsburgh in 2012 where she ministered as receptionist and sacristan at the motherhouse prior to beginning a Ministry of Prayer and Presence in 2014 at Presbyterian SeniorCare, Oakmont. 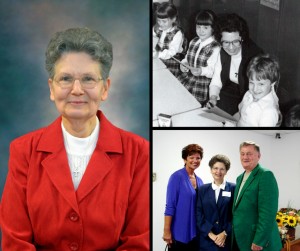 Sister Louise Marie Simcoe, OSF, a Sister of St. Francis of the Providence of God for 54 years died on March 30, 2018, at age 71.  A native of Pittsburgh, Sister Louise Marie attended St. Agnes School and St. Casimir’s High School prior to entering the congregation in 1964. Remaining true to her Pittsburgh roots, Sister attended LaRoche College and Duquesne University, earning her Bachelor’s degree in Education.

Sister served 27 years as an elementary school teacher, spending many of those years at James Lavelle School in West Mifflin and St. Valentine, Bethel Park. She also served in Mahanoy City, PA and New Kensington, PA, Elizabeth, NJ, and Grand Rapids, MI.  Sister Louise Marie served as assistant director of our Franciscan Child Day Care Center from 1996-1998, then.as vocation director and sacristan at our Pittsburgh motherhouse.  In 2002 Sister Louis Marie began serving as a pastoral visitor in Sharpsburg, PA, then as a pastoral assistant at St. Joseph Parish in Allison Park, PA until 2014 when she entered into the ministry of prayer. 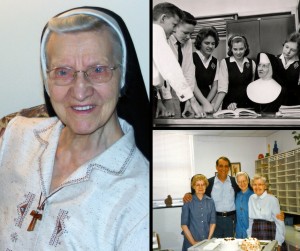 Sister Joan of Arc Urban, OSF, a Sister of St. Francis of the Providence of God for 85 years, died on March 4, 2018, at the age of 101. A native of Hartford, CT she entered our community in 1932 during her junior year at St. Francis Academy and was the first Sister in our congregation’s history to reach her 101 birthday and 85th Jubilee.

Sister began her many years in ministry as an elementary teacher at Sts. Peter and Paul Parish in Elizabeth, NJ, followed by teaching assignments as far west as Kenosha, WI, and as far east as Amsterdam, NY. She also served as an elementary principal in Kenosha. Sister Joan of Arc served as a catechist at Transfiguration Parish in Maspeth, NY, where in her own words, it was her most memorable assignment, “being a part of the parish and allowing me to be involved in all aspects of parish life.” Sister is a graduate of Duquesne University, with a Bachelor’s and Master’s degree in Education.

Sister Joan of Arc “retired” to the Pittsburgh motherhouse in 1990, where she remained active as the congregational postal clerk and receptionist until her 95th birthday. For the last several years, Sister Joan of Arc was the oldest Sister, and most likely the oldest person, participating with the Catholic Sisters of Western Pennsylvania, in Pittsburgh’s St. Patrick’s Day parade. Sister Joan of Arc resided with our Sisters at Nativity Convent where she ministered through prayer and a peaceful and loving presence to all persons she encountered, including parishioners at Nativity where she attended Mass until needing Hospice care in early 2018.