Grinding poverty distinguishes many regions in Brazil. During the congregation’s years of ministry here, our Sisters have found new energy and direction for responses to the poor. In remote regions of Brazilian states where health care is nonexistent and where poor villagers cook over coal stoves made from 10-gallon tins, our sisters minister.

Our sisters work with priests and lay persons in the pastoral ministry of the Church. Where there are poverty, grief, terminal illness or healthcare crises; where refugees seek a new life; where fragile and vulnerable elderly parishioners need spiritual consolation, pastoral ministers help. Their selflessness and compassion inspire and invite others to help expand needed outreach in parishes and communities.

At the Saint Francis and Saint Clare Social Center, also in São Paulo, children come together before and after school to study, learn skills and recreate with peers. The Center’s goal is to prevent at risk youngsters from becoming “street children.” 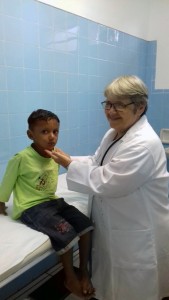 At the narrowest and deepest point of the Amazon River in northern Brazil is the town of Óbidos. Although the region is quite beautiful, most of the 50,000 citizens of Óbidos are poor and rely upon the harvesting of nuts, commercial fishing and small businesses for their livelihoods. Roads into and around the town are made entirely of dirt, as the community lacks the funding for asphalt. Óbidos is only accessible from São Paulo via a plane ride to the city of Santarém, followed by a three-hour journey by small motor boat – or a prolonged voyage on a larger ferry that takes up to eight hours.

The main hospital serving the town’s people is the Santa Casa De Misericordia De Óbidos, which is administered by a Franciscan congregation. Originally built by the Alcoa Corporation for their local workers, a new hospital is being erected, in a continuing partnership with Alcoa, in front of the older one to better serve the area. The Franciscan congregation has also raised money to build and operate a hospital boat.

Until recently, the hospital was served by three physicians.  Often, patients needing surgery had to be transported to another facility nearly two hours away.

To help alleviate this dire situation, Sister Marlene Aparecida Avanzi – a member of the Sisters of St. Francis of the Provid

ence of God in Brazil, medical doctor, and experienced surgeon – accepted an invitation to become a member of the hospital’s staff. By her presence, many patients requiring surgery will be able to have it performed on site. Sister Marlene will also be serving at a small emergency hospital in town, as well as on the traveling hospital boat. 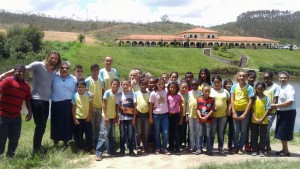 Picture a school with 370 students. Although the building’s exterior exhibits some modernity, inside are broken desks and outdated equipment. Children come each day dressed in ripped pants or shabby dresses and wearing old, broken thong sandals. 90 of the students are orphans – some actually live in pig pens as their homes! A number of the children are undernourished, having never eaten anything except rice. As such, 40% of the students have been diagnosed with learning disabilities due to the swelling of their brains caused by malnutrition. These children are also exposed to contaminated water, as wastewater often seeps into the local sources of drinking water. Moreover, there are also victims of incest, drug-dependent and alcoholic parents and domestic abuse among the student population.

Not a very pretty picture, but such was the former San Miguel School in the Brazilian city of Barbacena, located in the state of Minas Gerais, along the main highway that connects Brasilia (the capital of Brazil) and Rio de Janeiro.

Originally, the school was administered by a missionary from Italy, whose father funded the program. However, upon his father’s death, funding disappeared and the school was turned over to the state of Minas Gerais, who appointed a local missionary as administrator. However, the state was unable to properly fund the school. It fell into disrepair and, more importantly, there was a lack of any genuine learning atmosphere.

At this point, the local missionary approached our congregation and asked if we could take over the school’s administration. Once our leadership agreed, the contract with the state was cancelled, and we began to assemble a team.

The school has been re-named the St. Francis of Assisi School (Colégio São Francisco de Assis). Our Sisters assumed overall responsibility, but rely upon local teachers and other lay persons to administer the school.

As our Sisters took over sponsorship of the school, uniforms and sneakers were purchased for the students. Showers will be also be installed on site, as many of the children, lacking indoor plumbing, simply take a dip in the lake as a way of cleaning themselves before coming to school.

Presently, Sisters Maria do Carmo Pereira and Juliana Ayres da Silva serve the area’s residents through pastoral ministries among the local residents. A program providing food baskets for families is also being planned, and our Sisters will continue to seek ministry opportunities as they learn more about the area and the needs of the people.

If you would like to give to help our Sisters serving in Óbidos or Barbacena, or another area of Brazil,  donate online here.

For more information or other ways to help, please contact us at development@osfprov.org or 412-885-7232.

Sisters of St. Francis of the Providence of God in Brazil (Portuguese)