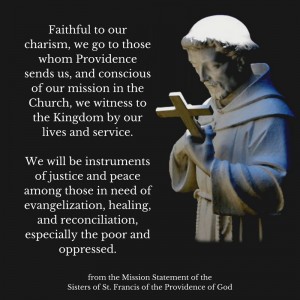 Following the U.S. Bishops’ mandate to all Catholics to labor for justice and peace, the Sisters of St. Francis of the Providence of God continue to work as agents of long-term social change. Our involvement in social justice and peace reflects the way St. Francis himself sought to bring about peace.

Most are aware that St. Francis is the patron of animals, but do you know he is also patron of the environment? Living his life according to the Gospel, St. Francis was a steward, an advocate, for the heavens and Earth as they reflect God’s love among us.  Faithfully following in the footsteps of St. Francis, the Sisters of St. Francis of the Providence of God are committed to respecting the Earth and all its creatures as gifts of God. Our environment, God’s creation is not just our surroundings. It is our common home that includes our family, our neighbors. As we strive be good stewards of God’s creation, we also advocate for efforts to heal our home and reconcile our relationship with the Earth and each other.

In Laudato si’:On Care For Our Common Home, Pope Francis writes, “When we speak of the ‘environment,’ what we really mean is a relationship existing between nature and the society which lives in it. Nature cannot be regarded as something separate from ourselves or as a mere setting in which we live. We are part of nature, included in it and thus in constant interaction with it. Recognizing the reasons why a given area is polluted requires a study of the workings of society, its economy, its behavior patterns, and the ways it grasps reality . . . we are faced not with two separate crises, one environmental and the other social, but rather with one complex crisis which is both social and environmental. Strategies for a solution demand an integrated approach to combating poverty, restoring dignity to the excluded, and at the same time protecting nature.”

Human trafficking is the modern-day practice of slavery. The trafficking of humans is the buying, selling, and transporting of people for any purpose, including sex, prostitution, forced marriages, servitude, and forced labor. It is exploitation and a violation of human rights and human dignity and is intrinsically evil. Traffickers are making $32 billion a year buying and selling people for their profit and pleasure.The profits are huge while the risk of being prosecuted is slim. The U.N. estimates that 99% of victims are never rescued.

We, the Sisters of St. Francis of the Providence of God, stand in solidarity with all who work to eliminate this tragic evil. We commit ourselves to these actions:

Join Us: How You Can Help End Human Trafficking You shall treat the stranger who resides with you no differently than the natives born among you; have the same love for that person as for yourself; for you, too, were once strangers in the land of Egypt.
Lev. 19:34

We, the Sisters of St. Francis of the Providence of God, believe that our present immigration law is badly broken and in need of reform: it ignores the human situation of separated families and the oppressive living conditions that force people to migrate.

Catholic Social Teaching has long taught us that:

Our stance is in support of the United States Conference of Catholic Bishops, calling for comprehensive immigration reform and includes the following four provisions:

We, the Sisters of St. Francis of the Providence of God, speak out against the death penalty. This action is motivated by our prayer, study, reflection and dialog on the Gospel of Jesus, the words of Pope John Paul II, the U.S. Conference of Catholic Bishops, and other religious leaders.

The death penalty is in violation of our most fundamental human rights. Capital punishment devalues all human life, eliminating the possibility for transformation of the spirit that is intrinsic to humanity.

We abhor the violence in our world and our hearts go out to the families and loved ones of victims of violent crimes and we acknowledge the importance of addressing their needs. We realize that society must protect itself against individuals who have proven to be dangerous. We support the development of ways to address the roots of violence. However, we believe that the death penalty perpetuates a cycle of violence that, in the end, diminishes all of us.

The Sisters of St. Francis of the Providence of God use socially responsible investing to work for justice which “is employing our assets to hold companies accountable for their impact on the environment or on society.”

In addition to investing for solid financial returns, we examine the companies in their portfolios for their social and environmental performance. Rather than simply selling stock when company policies or practices are harmful to people or the environment, we press companies to change by becoming involved in actions such as prayer vigils, letter writing campaigns and consumer boycotts.

In today’s’ world, violence seems pervasive to society. It has become so much a part of the fabric of our world that it can be difficult to connect the dots between the cause and effect. We are surrounded by violence that takes many forms: war; regional and ethnic conflicts; nuclear, biological and chemical weapons; drones; cultural violence in films and video games; and, especially in the United States, thousands of deaths each year by guns.

Any American with even a glancing familiarity with the news can rattle off the litany of cities and towns transformed into metonyms for gun violence: An Antonio, Dayton, Pittsburgh, Parkland, Sutherland Springs, Las Vegas, San Bernardino, Colorado Springs, Orlando, Charleston, Fort Hood, Sandy Hook. Since 2011, mass shootings have tripled in the United States and they are becoming more deadly. But, mass shootings are just a part of the plague of gun violence in the United States. Smaller scale, but no less tragic, incidents of gun violence occur daily in homes, businesses, community buildings, places of worship and street corners across the country. Add to this roughly 21,000 Americans who take their own lives with firearms annually.

No official figure exists, but there are thought to be about 300 million guns in the United States, held by about one-third of the population. That is nearly enough for every man, woman, and child in the country.

This level of violence makes our country an extreme outlier when measured against the experience of other advanced nations. In Germany, for example, being murdered with a gun is as uncommon as being killed by a falling object in the U.S. Gun homicides are just as rare in several other European nations, including the Netherlands and Austria. In Poland and England, only about one out of every million people die in gun homicides each year. In Japan, where gun homicides are even rarer, the likelihood of dying this way is about the same as an Americans’ chance of being killed by lightning – roughly one in ten million.

Most frustrating is that gun violence is not inevitable. There are solutions. But, it requires us all to have a difficult and honest conversation about gun culture and violence in the United States. To better understand why this scale of violence is unique to our country, we must also have the freedom to discuss and study gun violence. (“Why Can’t the U.S. Treat Gun Violence as a Public-Health Problem?”)

As members of the Franciscan Federation, our congregation supports the resolution adopted at the 2016 Federation conference: Be it resolved that we, as members of the Franciscan Federation . . . in the tradition of St. Francis and St. Clare of Assisi, denounce all forms of gun violence that is tearing apart the social fabric of society and leaving children dead in our streets and families afraid in their homes. . . . We pledge to work for the elimination of gun violence by committing ourselves to respect for life by cultivating a culture of life that explores nonviolent living and to advocate for each individual, family, school, and neighborhood so that our communities can once again become places of peace and beacons of life movements.

We encourage everyone to: